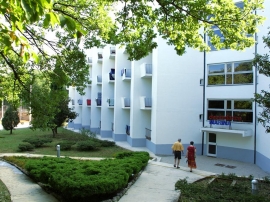 Hotel Adriatic 2 ** - Omisalj, island Krk
Hotel complex is situated in a picturesque town on the northwestern part of the island of Krk. Hotels Omisalj consists of three nearby hotels which are all 2 min walk from the seaside promenade and the main building.
The rooms include: Shower, Phone, TV with satellite, Balcony (in most rooms)
Services in “Adriatic”: 24 hour front desk, Wireless Internet (WiFi) for FREE in the hotel lobby, Exchanging office, Fax, photocopy, Safe deposit box at the reception, International calling service at the reception, Gift shop – postcards, stamps, maps, souvenirs, newspapers, hygiene accessories, Restaurant a’ la carte, Swedish table for breakfast and dinner, Bar, Disco-bar with pool tables, Hairdresser, Massage salon