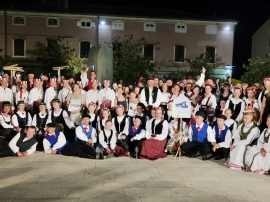 20.09.-23.09.2018.
Performances: 21.09. in Porec/Lanterna complex and 22.09. in Porec city square
Each group has two performances.
Participants: Folklore groups, Orchestras, Majorettes, Modern dance groups, Choirs, Music bands from all over the world, Choirs who are able to perform on open-air stages. The number of the participants are not limited.No age limits.

About location:
Istra region
Istria is one of the most popular destinations for foreign visitors to Croatia and its towns of Umag and Porec continually top annual polls of the best holiday resorts in Croatia, as organized by the Croatian National Tourist Board and Croatian TV. With a strong Italian influence (the region in fact used to be part of Italy during the early part of the 20th century), this certainly is a beautiful region of Croatia both along the coast and inland, with its pretty hilltop towns. Rovinj is a true gem of a town, and Pula is also well-worth a visit – home to the Arena, a very well-preserved Roman amphitheater. The one thing that Istria does lack, however, compared to more southern coastal regions are many large islands. The Brijuni group of islands (near Pula) are the exception and great for a day-trip.


Porec
All of the old city of Porec is a tourist stage; this is a place where you can learn from the historical monuments, read from the facades and stone paved streets from the Roman era. The most unique monument is Euphrasius' Basilica, an early Christian cathedral, but there are many other symbols of 2000 years of history of the city. The old heart of the city of Poreč is also a great place to have fun. Ancient Decamanus, the main street of the old city, is a perfect promenade during the summer. Even if you haven't planned anything, something will draw your attention: jazz in the ancient stone collection garden or classical music concert in the Basilica, summer cocktails on the ancient Marafor Square, or simply watch the streams of people passing by. Wherever you go in the old city, everything has a distinctive charm because it pulsates both with ancient and modern times. Some ofthe streets and squares are the stage of the summer Street art.