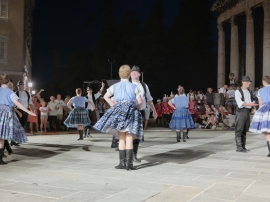 International folklore and dance festival "Summer in Istra 2015"
02.07.-05.07.2015.
Performances: 03.07. in Porec and 04.07. in Pula
Each group has guranteed two performances.
Accommodation in apartment complex 2 ** in Porec including breakfast and dinner

About location:
Istra region
Region Istra is the westernmost county of the Republic of Croatia and the largest peninsula of the Adriatic.

Porec
All of the old city of Porec is a tourist stage; this is a place where you can learn from the historical monuments, read from the facades and stone paved streets from the Roman era. The most unique monument is Euphrasius' Basilica, an early Christian cathedral, but there are many other symbols of 2000 years of history of the city. The old heart of the city of Poreč is also a great place to have fun. Ancient Decamanus, the main street of the old city, is a perfect promenade during the summer. Even if you haven't planned anything, something will draw your attention: jazz in the ancient stone collection garden or classical music concert in the Basilica, summer cocktails on the ancient Marafor Square, or simply watch the streams of people passing by. Wherever you go in the old city, everything has a distinctive charm because it pulsates both with ancient and modern times. Some ofthe streets and squares are the stage of the summer Street art.

Pula
Pula, a city that has existed for three thousand years, is situated in the south of the Istrian peninsula. The town has beautiful beaches spread over nearly one hundred miles of beautiful and indented coastline.If you visit Pula, you will hear whispers about a story of mythical Argonauts, Romans, Venetians, Franks and the time of the Austrian and Hungarian Empire. The city-museum will present you with its buildings and monuments preserved from bygone times: the Arch of the Sergi, Temple of Augustus, Hercules door...In Pula you will enjoy excellent restaurants, and on the most beautiful stage in the world, in the Arena under the stars, during the summer you can listen to some of the most famous names from the world of music.

About festival:
Participants: Folklore groups, Orchestras, Majorettes, Modern dance groups, Choirs, Music bands from all over the world, Choirs who are able to perform on open-air stages. The number of the participants are not limited.No age limits. Number of seats are limited!